This is the story of The Ditch. 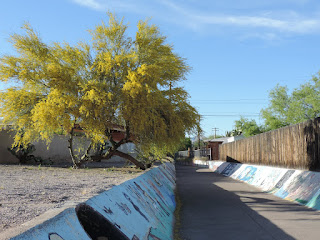 The city of Tucson grew up on a desert valley floor, which once was covered in cacti, shrubs, blooming vines and all manner of flora adapted to a climate that dumps the annual precipitation within a few weeks and stubbornly withholds moisture for the rest of the year. It’s not such a bad schedule, once you get used to it. The valley floor was threaded with the branches and arroyos of the Rillito and Santa Cruz rivers, which were ready at a moment’s notice to receive a year’s worth of rain and speedily send the runoff on its way. Thus solving one of Tucson’s primary logistical problems: drainage.

I suspect The Ditch was once an arroyo, but it didn’t get paved. At least, not all of it. Over the course of three blocks near where I live, The Ditch forms a small indentation through a grassy park, becomes a dug-out median with trees, and transforms into a concrete-sided art show before disappearing underground. I take visitors on a walking tour to The Ditch like it’s a famous Tucson attraction. As a neighborhood feature, it’s great—the close-mowed park iteration; the weedier, less tame median iteration; and the concrete culvert that neighborhood kids have painted with murals to fend off gang sign. It forms an unexpected corridor, a public space that is not secret or neglected but not fastidiously managed, either. 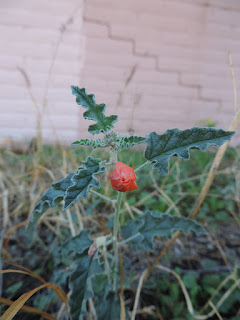 And it’s weedy. Oh yes, full of invasive species: nasty little mustards like Capsella bursa-pastoris and Sisymbrium irio. Lamium amplexicaule, Henbit nettle. Sonchus oleraceus, Common cowthistle. An escaped lantana shrub took root there for a season and bloomed placidly without bothering to spread. An African Daisy (Dimorphotheca) got out of someone’s flowerbed and looked shockingly bright and out of place. But The Ditch is an amazingly diverse spot, and it supports a lot of native weeds, too: two kinds of nightshade, globemallow, the tiny-flowered Euphorbiaceae called rattlesnake weed. A whole bunch of grasses (no pun intended), and roughly one bazillion borage forbs and asters that I am too busy and too intimidated to begin identifying. Every so often, the city comes and mows it all down, and the cycle begins again.

Other people walk their dogs along The Ditch, but I am usually the only one taking close-up portraits of the weeds. A new species every week, as I suspect there will be for years until I get to know the plants better. Overhead are trees, some kind of acacia I think, which have been grafted onto a native acacia’s rootstock. In the spring, they bloom with almost painfully flagrant gold flowers and come alive with birds.

But beyond the trees are the murals, and these are the real attraction. Surrounded by the creepy cartoon characters, stick figures, flower power and obscure references to kid culture, the mural says it was painted during the “Summer of Service 2010.” The parameters must have been broad: “Anything you want, nothing nasty or profane.” Skulls were okay. Blood was okay in moderation. Pre-teen angst was okay: see the fish with a hook in its mouth and a speech bubble, “Am I in heaven?” There is a certain amount of sunny inspirational stuff—a quote from JFK, a quote from Dr. Who. There are some beautiful desert scenes, and a cityscape that blends seamlessly into an under-the-seascape, with the octopus and the pedestrian on the same level. Show me the bad day that can’t be turned around by this nonsense. Or don’t. 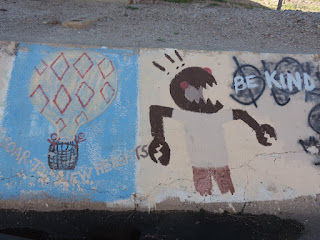 I took my out-of-town friend to The Ditch, and it was just around the corner that we saw a man in the street. He was lying on the pavement, writhing, and a woman had parked protectively nearby but she didn’t seem to want to touch him. “I don’t want anyone to run him over,” she said anxiously. The man moaned. He struggled to get up but rolled over again. “I called 911,” the woman said, but when help arrived it was only police, and it took longer for the ambulance to come. My friend is a nurse, and she pursed her lips and walked over to see if he could talk. He could not, comprehensively. “Overdose,” she said, her eyebrows still knit together in displeasure. Over this man in particular or the world in general, I couldn’t really tell. Her young niece was with us, and the girl nodded knowingly. “Yeah, that happened to my mom.”

Somebody plays basketball in the park. He brings a portable radio and shoots hoop after hoop alone. His buddy shows up around the same time as a mother with five children in tow. They are screaming happy like the birds. They all go down the slide in a row. “Choo! Choo!” Mom calls from the bottom of the pile, and all the kids reply, “Choo! Choo!” They don’t need English for that. The Ditch solves multiple logistical problems.

For example, it never floods too badly in this neighborhood. The water crosses several streets, but the exposed and absorbent soil helps, it seems, as it funnels the runoff away. And we need this pretty badly, I think: just the midpoint between cleaned-up and forgotten, between paved-over and scrupulously protected. Just somewhere for the water to run before it crosses the street, into the storm drain, and out of sight. 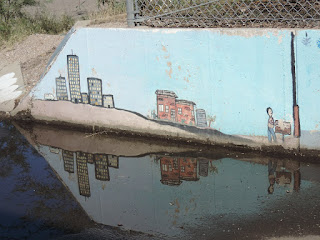