The Collection:
Non-native seeds purchased on eBay with no other guide than novelty and childish wonder.

The Project:
With little know-how, or gardening experience, or research into soils and climates and temperatures and fertilizer and scoriation and stratification, the author hoped to grow from seed a set of plants that seemed inaccessible by location (Tucson, AZ) and/or wholly abstracted from nature by the commercialism of globalist late capitalism.

Second, Aborted Project:
To then use the produce from these seeds to make the familiar products associated with the plants, thus furthering the defamiliarization of those products by rendering their production wholly visible and accessible.

The Hypothesis:
The world isn’t as difficult, or inaccessible, as it’s advertised to be. Also, the author supposes, that globalization is pretty neat: that one can send $3 to Lithuania, and receive Japanese Barberry Tree seeds. And that it will work out.

Abstract:
When an experiment is intentionally designed to be naïve and it fails, one supposed one cannot blame anyone but oneself. And yet, the world has been teaching the author since he became an adult that it is so much more slapdash, unthought-out, over-hyped, and naïve itself than anyone seems to acknowledge. The author became a cook without knowing how to cook, an editor of legal textbooks with no knowledge of the law, began a nonprofit, built a chickenwire hutch, repaired an 8-track player, secured a temporary living as a writer (a true absurdity), and these are not boasts¾one can do these things, right now, with almost zero googling.
So why can’t a sequoia tree be grown in Arizona? The author is not asking about science, he is asking about permission.

Method:
Plant, in planters, using Home Depot potting soil. Water daily. Transplant to larger pots as needed, or in the case of corn, to a plastic bucket with holes drilled into the bottom. Look out the window at the seedlings, sometimes, head against the glass, missing the autumn and certain rhythms of life sacrificed in order to come to Arizona. Needless to say, given a 2500 mile separation from fiancé, certain people as well.

Results (see below for photographs):

The Unmitigated Failures
Here is why this project has become so dispiriting: it was meant to be an exercise in optimism and wonder. In, hah, hope. What timing.
It was meant to take certain abstractions and render them physical, obtainable, and completely defamiliar to normal life. The author wanted to ground chocolate in a physical reality in a country where cacao-based chocolate is becoming increasingly rare.
Here is a cashew plant outside of factory farming.
Here is a durian plant outside of Southeast Asia.
Here is poison ivy as a seed, a choice, rather than an accident.
So, the author has been humbled, then. This shows him to seek reality in a year of magical thinking. Or, come on, to not be so blithe and uninformed. (So many lessons lately!) Just because the internet exists, and one can send one’s money to Istanbul, Saint Lucia, Bangkok, and receive certain small aspects of their world, does not mean that one can ignore certain basic facts about soil, care, and place.

The Mitigated Successes
In September there were early successes. Though the seeds were sent from Florida, two Middle Eastern plants better known by the spice they produce (poppy seed and fenugreek) sprouted and seemed to thrive. The former, however, stopped growing after a month, refused to take root, and withered sprout by sprout. This was during October 2016, a month of many crises, both personal and national. The author will admit, he did yell at this pot of dying poppy sprouts, taking their suicide as personal insult. He also apologized, and propped the larger plants up with little sticks, and whispered encouragement. The last plant died around Halloween.
Mid-October, the Fenugreek was ripped apart by birds.
For the most part, the remaining successes offer a conclusion more disappointing even than total failure, at least from an aesthetic perspective: No Duh. Corn grows in Tucson. So do hot peppers. So, until the birds came again and again, does barley. From a humanist perspective, the author will make a spicy corn salad and feel some pride.
The most exciting result is that a set of seeds purported to be purple tomatoes, sold through a clearly faked photo of deeply purple fruits, purchased through willful naivety, sent from Malaysia, have sprouted. They seem to be thriving. They do not appear to be tomato plants. The author tends the pots and wonders—what rare and distant fruits does he keep? If they produce, will he eat the results? It seems likely. Keep in touch, and prepare to send for help.

The “Actually Trying Here”s
The final two seed packets to arrive, Juniper from Istanbul and Barberry from Lithuania, the author chose to google. And yes, he has learned how little he knows. The Barberry Tree seeds require 60 days of cold stratification. They are currently within a freezer bag, immersed in peat moss, lying on top of hot dogs in the vegetable crisper, 39 days from possible germination. The Juniper Tree seeds require 60 days of hot stratification (atop the author’s fridge), and 90 days of cold stratification (atop the author’s hot dogs). And then, one supposes, more research, more care, more knowledge. 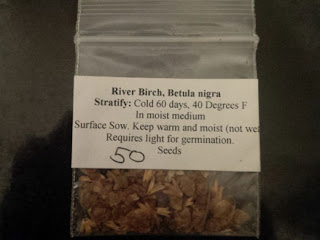 (Purchased because the author was craving New England) 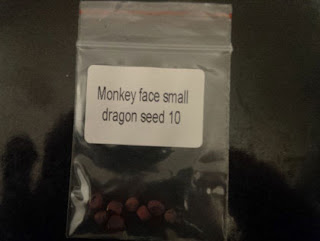 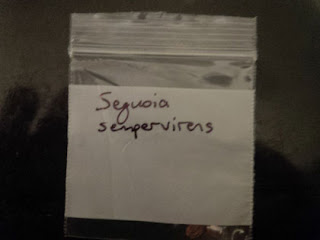 (This was my greatest hope. Two months after planting, a blade of grass began growing from the planter. The author continues to water this grass at the time of writing.) 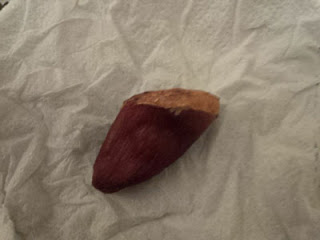 (Another gesture of wonder: That such a huge and distant tree could be purchased by seed. Research says these seeds lose viability after three days. This was delivered wrapped in toilet paper.) 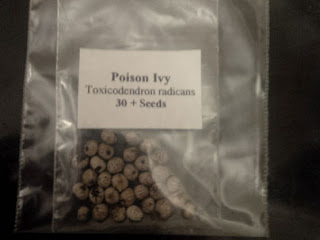 (Planted with such guilt, and the sort of excitement that comes from active guilt. These seeds are bone-white, and smell of tobacco even now. Delivered wrapped in two bags, and taped inside cardboard. The author planted them wearing disposable gloves, felt itchy for days, and believes a rash is developing on his arm at the time of writing from handling the bag while taking this photograph. Due to his guilt and trepidation, the author was certain these seeds would sprout. But no wonder from this project, not even of a negative kind.) 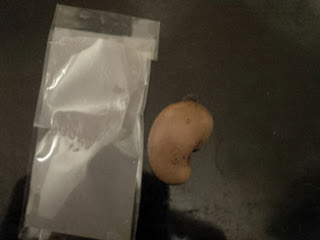 (Delivered in a disposable sealed bag, as if very common. Stolen by birds soon after planting.) 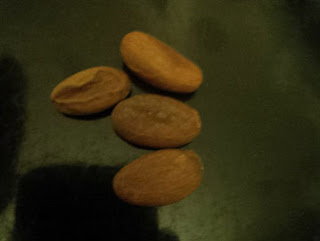 (One hour after purchase, the seller emailed demanding that payment be made. The seeds arrived nine weeks later, loose in their envelope. Wouldn’t it have been lovely?) 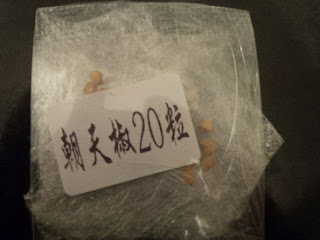 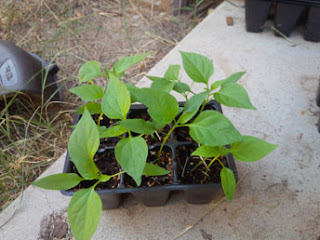 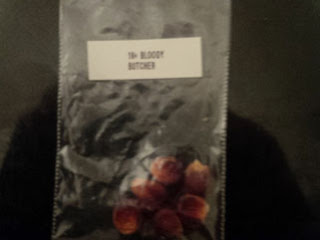 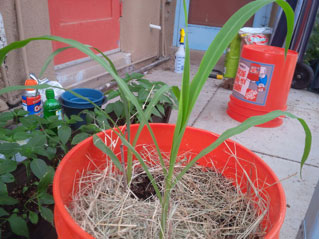 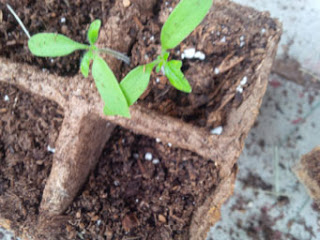 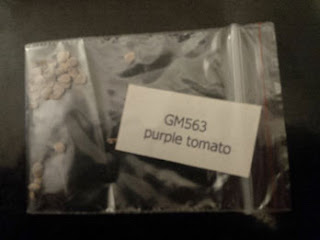 Purple Tomato (???): Malaysia
(Advertised by a picture of very very purple tomatoes(?). It remains to be seen. This was the only non-continental, non-pepper seed to take root.) 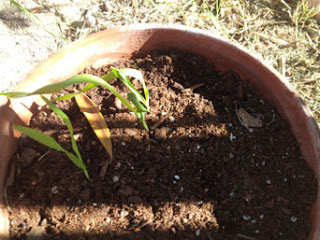 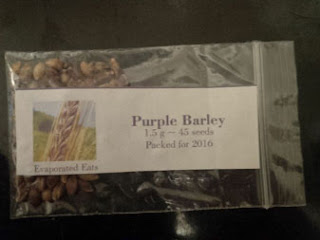 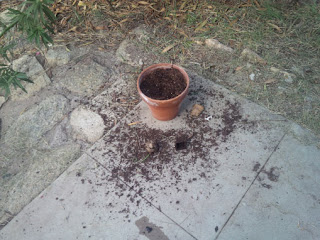 (Barley! The author was very interested in grains at this time. Then came the birds.) 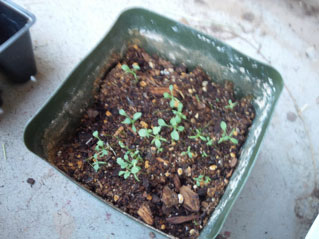 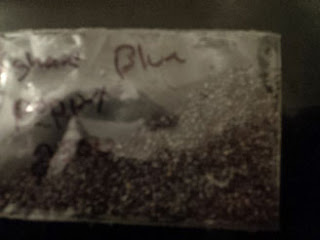 Afghan Blue Poppy (Papaver somniferum): Sanford, Florida USA
(This result was very surprising to the author, and filled him with an early confidence. However, these sprouts never formed root systems, and basically chose to die before the author’s eyes through sheer spite.) 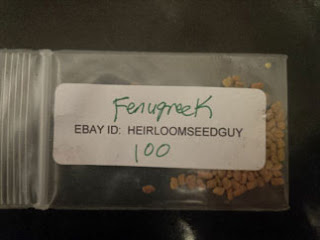 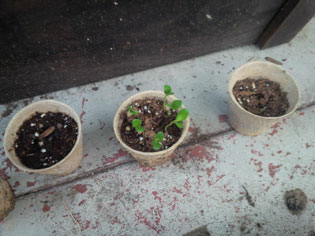 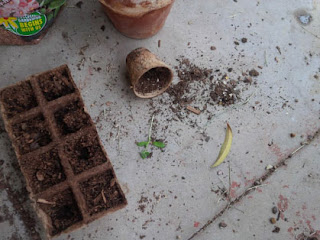 Fenugreek (Trigonella foenum-graecum): Julian, California USA
(A spice used as a leavening agent before baking powder and baking soda. The author has used it to make a very tasty flatbread which goes well with stew. Another early, promising result. Another casualty of birds.) 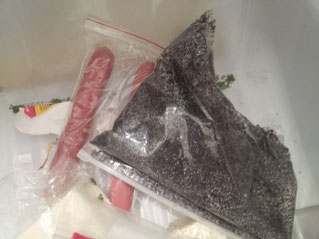 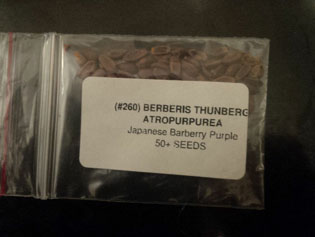 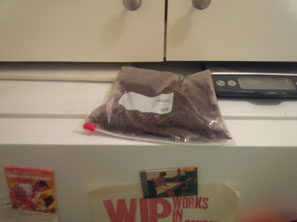 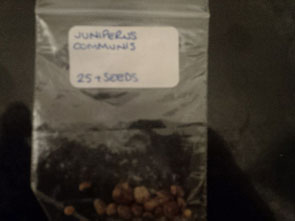 Juniper Tree (Juniperus communis): Istanbul, Turkey
(A gesture toward Tucson, before the author learned that you have Cyprus trees here. The author plans to, next year, if they take root, take up Bonsai pruning with almost no prior research.)