There’s a bug on Instagram that affects so few people there’s no real urgent need to fix it. I don’t even know if it can be classified as a bug, to be honest, because technically it works the way it’s supposed to. It’s just that for people with common usernames like mine—as an early user of Instagram I snagged @josh—it can cause significant confusion.

Many people with friends named Josh simply write @josh in their Instagram captions, even though it’s not me in their photos. On Instagram, I just ignore them. When these photos are shared to Twitter, however, and the username is converted to my full name—@joshriedel—it feels much more personal.

I had largely ignored these Twitter mis-mentions until one day, last summer, when my inbox filled with Twitter notifications about my supposed appearance at Comic-Con. Thanks @GQMagazine, the stylist Ilaria Urbinati tweeted, for including Tom Hiddleston, @joshriedel Dallas, and Ben Affleck in your…—at this point the tweet had reached 140 characters so I went to Instagram to read the rest of the caption—…Best Dressed Guys at Comicon list. All styled by yours truly.

I had a brief what-the-hell? moment, trying to figure out why I was mentioned in this tweet, whether I knew this Ilaria stylist person, and actually considering, briefly, whether I had in fact gone to Comic-Con earlier that summer. Inspecting the photo on Instagram, I admit I got a little giddy, searching for myself in a collage of well-dressed men waving at the cameras on whatever counts as the Comic-Con red-carpet. It didn’t take long to discover, sadly, that I wasn’t among the well-dressed men. Apparently Ilaria had meant to mention @joshdallas. 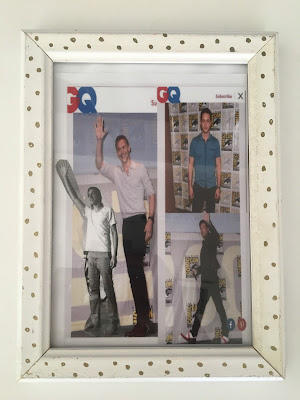 From then on, I became intrigued with these mis-mentions. I began to feel a certain affinity with my online Josh counterparts, these people who share an internet namespace with me. A new mis-mention pops up for me every week or so. Here @joshriedel is dancing at his wedding, here he is with his band backstage, here he is having tea with his buddy in Hyderabad.

There’s so much talk of echo chambers, these days, so much talk of how we construct our online worlds to reinforce what we already believe. These mis-mentions feel like little cracks in the code, offering up a serendipitous expansion of my online world I don’t come across in my routine interneting.
Posted by Josh at 9:29 AM