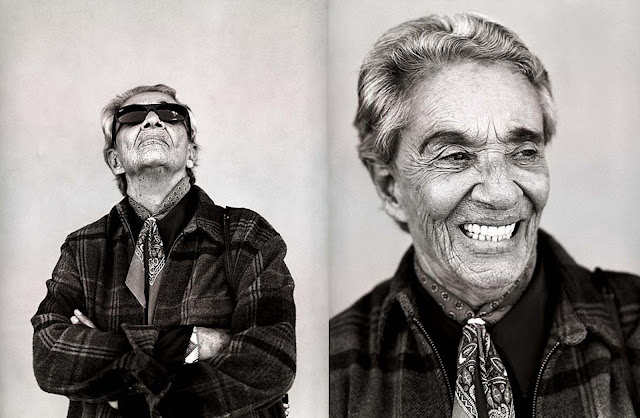 I was a newly minted butch in 2003, the first thing having arrived in New York was to head to the lesbian salon I had found in an ad in the bag of GO! magazine and promptly asked to have my hair cut really short. It was September in New York and I felt so far away from the México of my Los Angeles, California. I was a pretty awesome nationalist failure but in a new semester in the destabilizing endeavor in the mind-melding field of performance studies I was retracting into some semblance of puro avowal. I wanted to play in Aztlán like it was mama’s apron strings but couldn’t because critical theory. And I was game to discipline myself in a new space. Still that year I remember Café Tacuba playing the bandshell at Prospect Park and getting a postcard that Chavela Vargas was making her debut at 83 years-old at Carnegie Hall.
Ay, chingao, I better get tickets! I said to no one in particular especially since I had no Chicanx friends in New York. I splurged the way graduate students are known to do and went in for 2nd row. And arriving it felt like Chavela wasn’t the only Mexican making their debut at Carnegie Hall. The prestigious concert hall was decked out in Mexicanxs. I sat at my privileged seat and looked around what felt like a holy domed cathedral (bc Catholicism…bc brown) and saw the Mexican flags—the easy gesture to signal que estabamos en casa. Not to be outdone, there were a couple of concert attendees that had brought in their Costa Rican flags, too, to help buoy their voices in claiming Chavela as their original. This I could relate to since my Salvadoran mother gave birth to a daughter in Los Angeles who came with a Mexican heart. For me feelings outweigh national affiliations.
Then the lights flicker and I turn my attention to Salma Hayek and Eliot Goldenthal (the star of and the composer who scored the film, Frida) who introduce the artist to her public.
Chavela no canta, es una canción gushed Hayek offering her tribute in a Spanish that wouldn’t need translating that evening.
And it begins and it is transcendent. Chavela skulks to the microphone stand in her signature red and black zarape, arms raised to embrace her public starving for the kind of cathartic release that can only come at the stone-hardened tongue of Mexico’s finest interlocutor of seething heartbreak.
And then it happens. The earth opens up and I am summonsed by the incantatory growl: Yo soy como el chile verde, Llorona, picante pero sabroso. A performative utterance that hails me to strive towards an ontological apex—to become that brown butch that makes your mouth water. Dangerously hot, but so goddamn delicious.
Chavela, flanked by two guitarruistas, has a mysterious bottle at her feet. One has to assume it is the tequila that has been part of her lore and downfall. But nary does she ever sip from it because as you learn in Chavela, the new documentary by Catherine Gund, Daresha Kyi, and Carla Gutiérrez, Chavela wouldn’t have been able to have performed at Carnegie Hall if she hadn’t quit drinking in the early 90s. It was in the early 90s that Jesusa Rodríguez and Liliana Felipe invited Chavela to stage her comeback at El Hábito, the cabaret space the two women ran. I always heard about this artistic rebirth from the anecdotal registers that came with being in performance studies grad program (and Diana Taylor dropping this bit of factual lore in the comment section of my Facebook homenaje to Chavela when she passed away in the late summer of 2012).
This is my memory activated after watching Chavela. One of the many aspects of Chavela Vargas’ various transgressions that I take as a cautionary mode for a longer-lasting butch life. I have never drunk as hard as Chavela did—mostly because I haven’t made friends with anyone resembling the preternaturally gifted composer José Alfredo Jiménez, (a significant friendship and artistic collaboration with Jiménez, composer of the songs she made not just famous but managed to sear into the collective memory of anyone who has ever coupled tequila to heartbreak). I don’t know anyone that wants to binge-drink on Friday and end said binge by Wednesday. But I understand where that self-soothing impulse comes from and that as artists we hold space for one another when those impulses arise. And only within a kinship peopled by other artists who are often similarly discarded by families of origin do those impulses become indulged.
Era muy sola. She says of her painful childhood in Costa Rica.
Una niña rara. She was a masculine girl. The daughter of parents too concerned with what people thought; a traditional people burdened by a rebellious daughter. Her parents split up and left no word of their whereabout when they abandoned young Isabel with her aunt and uncle. Gloria Anzaldua calls these psychic injuries a “rajadura”—a hard split and it’s one I can almost innately inhabit as I was often asked to not come by the house whenever family from El Salvador was visiting. I learned the art of a solo Christmas early in my adulthood, opting to do an “orphan Thanksgiving” instead of coming home for the holidays.
The priest upon seeing Isabel Vargas approach the church barred her entry. Her parents would hide her when guests visited treating her no less than a rabid dog.
Is all of this what it is to be a brown butch in painful, socially constricted chrysalis? It feels so uncanny to see her life unfurl, an identification with her pain that can’t help but tumble out of me.

Her body           a vessel filling with rage
she had endured in her native country.           focused             leaving as soon as she could.
Mexico City in the mid-1930s harnessed            rage         a musicality
that had never been seen before then.
Con ojos de noches Havana, a Costa Rican national with a Mexican soul,
she belonged to all of the Ámericas
In México she was raised in the land of men. Here in what persists despite the treaty,
for me that instruction becomes caution.
Posted by Ander at 9:30 AM