This is a scene from a larger inquiry into the decline of agriculture in Southern Arizona, of the shifting interest from farming to development and urban expansion, both in the flow of money and water. And a few photos poorly snapped and unredeemed through amateur Lightroom editing.

I drove North out of Tucson, turning off the I-10 on Tangerine Road. Following a dirt service road, I skirt around fields of cotton and back to a stand of trees. Tucked into the shade, and overgrown with creosote and weeds is a white house with a half height chain fence around it - the house my mother grew up in. I lean on the fence, the hundred degree air lifting in a slight afternoon breeze. The last time I was here was before the turn of the millennium, at Easter and I remember it snowed so that all the eggs hidden the night before were lost under a few inches of desert snow. My parents, aunts, and uncles all stood out on the porch looking at the buried cotton fields and white feathered mesquite trees, while a cousin and I played with toy cars in the living room that smelled of mothballs.
Now, this fence is here to keep out vandals and the dirt of the parking area is so soft it falls into my shoes at the ankles. Small, dust-covered clumps of cotton litter the space between the trees, along with shotgun shells and broken bottles.
My grandmother, who hid the easter eggs, and my grandfather, who I never met, built the house themselves in the mid 60’s (for $17,000) and owned the surrounding eighty acres. They raised six children here, three daughters and three sons. In the late 80’s or early 90’s, they sold some of their land to the Central Arizona Project so the canal could cut through a corner of the property. The house flooded a few times (unrelated to the CAP) and after Max died and Velma couldn’t live alone anymore, the house was abandoned. A few relatives stop by every now and then, just to look at it.
I walk through an opening in the fence, and a wall of weeds up to my hips, stepping onto the concrete porch under an awning. An outdoor, red brick fireplace is filled with old soot and dirt. The front door, still on its hinges and closed is completely open to pass through, the broken glass still fanned out inside. Through another door on the opposite wall, the sun is beaming in, angling trapezoidal patches of light on the mouse-shit covered floor. Every window is broken.
I step on glass shards and chunks of plaster, and wander around the house; through the room my Mom lived in with one of her sisters, through the two bathrooms with point-blank cones of pellet-holes shot into the walls. There’s nothing left unbroken: faucets, light switches, pipes, wall tiles.
There is no sound in the house. No stuffiness, but no air moving either. Even though the windows are just frames the wind outside doesn’t reach in. There’s no draft from the bullet hole constellations in the thin plaster. The sound of floor debris shifting under my shoes is a small quiet in the house’s silence. It’s a place with its history expunged - no conflict between the past and present. I didn’t pick up any cracked photographs from the rubble. There were no rotting dresses in the closets. Nowhere did I find any record of the many years my family lived there. The house just kept being without having to explain itself to a human interest.
I walk back to my car. The wind is blowing now, the patterns of shade under the trees twisting and tugging. Across the irrigated cotton fields the North side of the Catalinas basks in cloud shadows, rearing up behind the cement plant. Someone else must own the cotton now. It’s a forced green in the brown landscape, the white buds look full and ready to be picked. 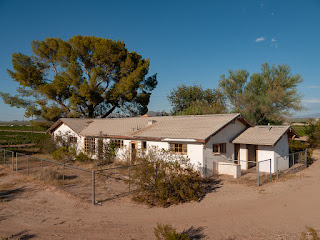 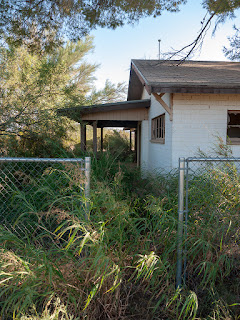 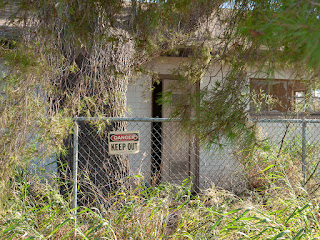 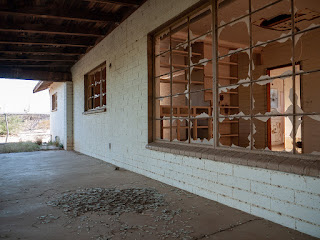 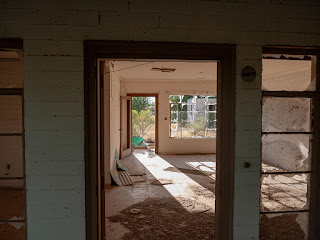 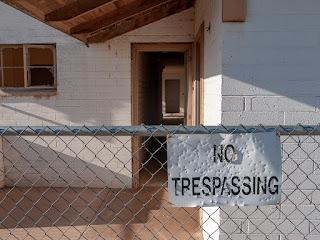 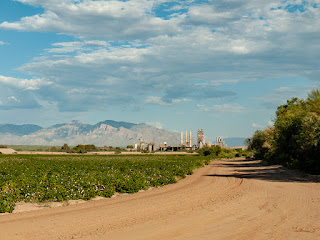 Posted by Jack Hereford at 2:42 PM