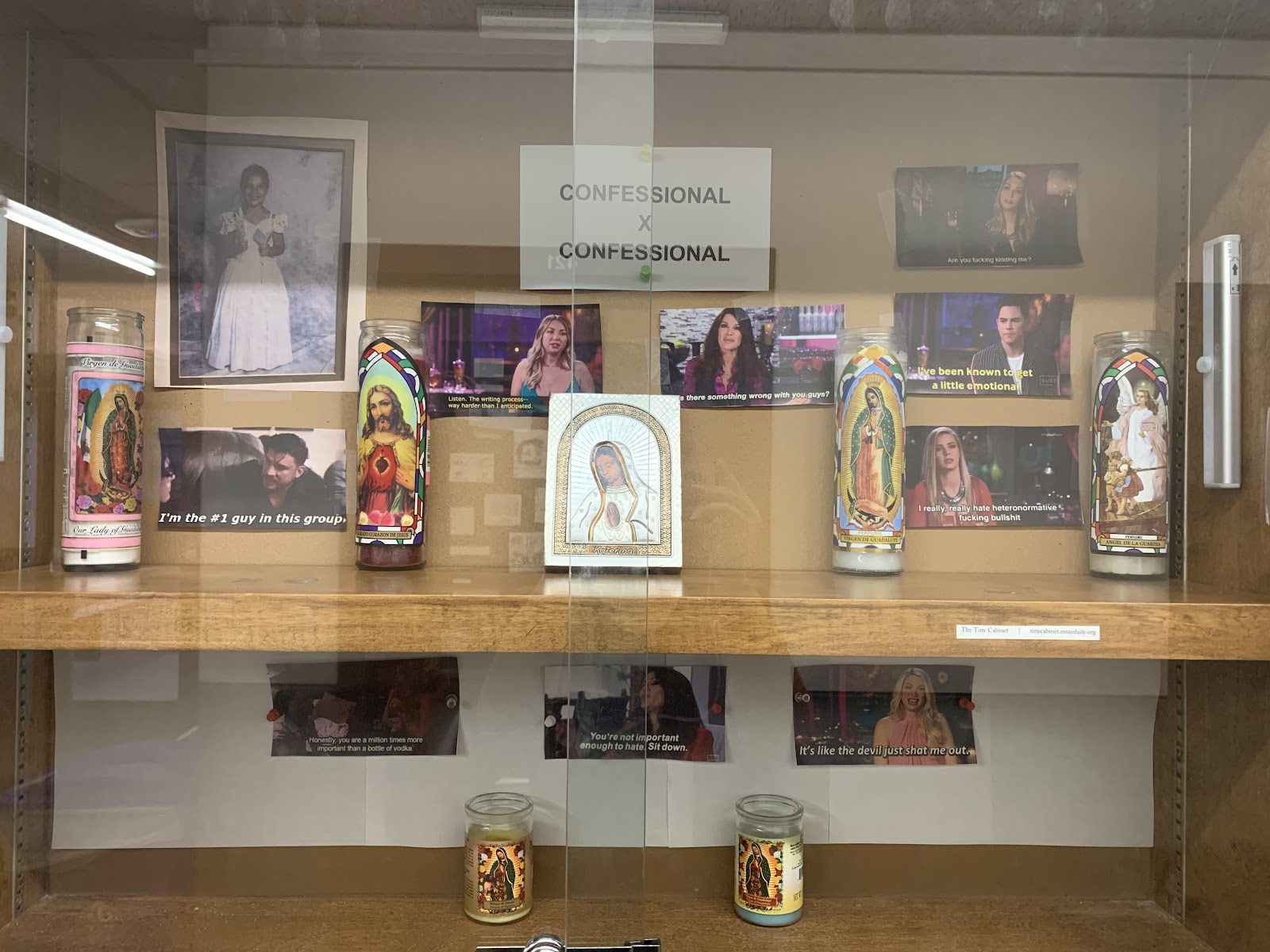 My mother mainlines Catholicism. She recounts stories of kneeling pilgrimages to the cathedral in the city center of Guadalajara. She crawled alongside her grandmother, in the dirt streets, for penance. My mother was twelve. A child.

Even now, when my mother serves as a Eucharistic minister at a small Catholic church in Florida, she weeps every time she distributes the Eucharist. This is because each time, she feels so close to God, she is overwhelmed by tears. This sounds sweet, if not a little sad in theory, but in practice, it is hilarious.

A scenario: You are walking up to receive communion. You are missing Sunday football, or thinking about whether the priest is hot or not, or focusing on holding your hands out nicely for the host and… there she is. A little Mexican woman. Tears streaming down her face. Grinning with both lines of teeth. Body of Christ, she sobs at you. Uh, thanks. I mean, Amen. You rush back to your pew. She blows her nose.
*

I have two great loves in my life. My mother and Reality TV. I watch all the trash I can download:  I watch The Bachelor. The Bachelorette. Bachelor in Paradise. Love Island. Summer House. 90 Day Fiance. Love and Hip Hop. The Real World. Real Housewives. Teen Mom. But my favorite is Vanderpump Rules.

The premise: The show follows waitstaff and bartenders and the most incestuous restaurant in West Hollywood, Lisa Vanderpump’s S.U.R., an acronym that stands for--and I cannot stress this enough-- sexy, unique restaurant. This ragtag group of wannabe actors, singers, musicians, models, and ??? (Celebrities? Influencer? Rich-people-in training?) spends most of the show drinking, sleeping with each other, and slinging zingy one-liners and tequila in equal measure. This, by all accounts, sounds absolutely insipid. The show is cringeworthy and cruel and very, very, very white. And I cannot get enough of it.
* 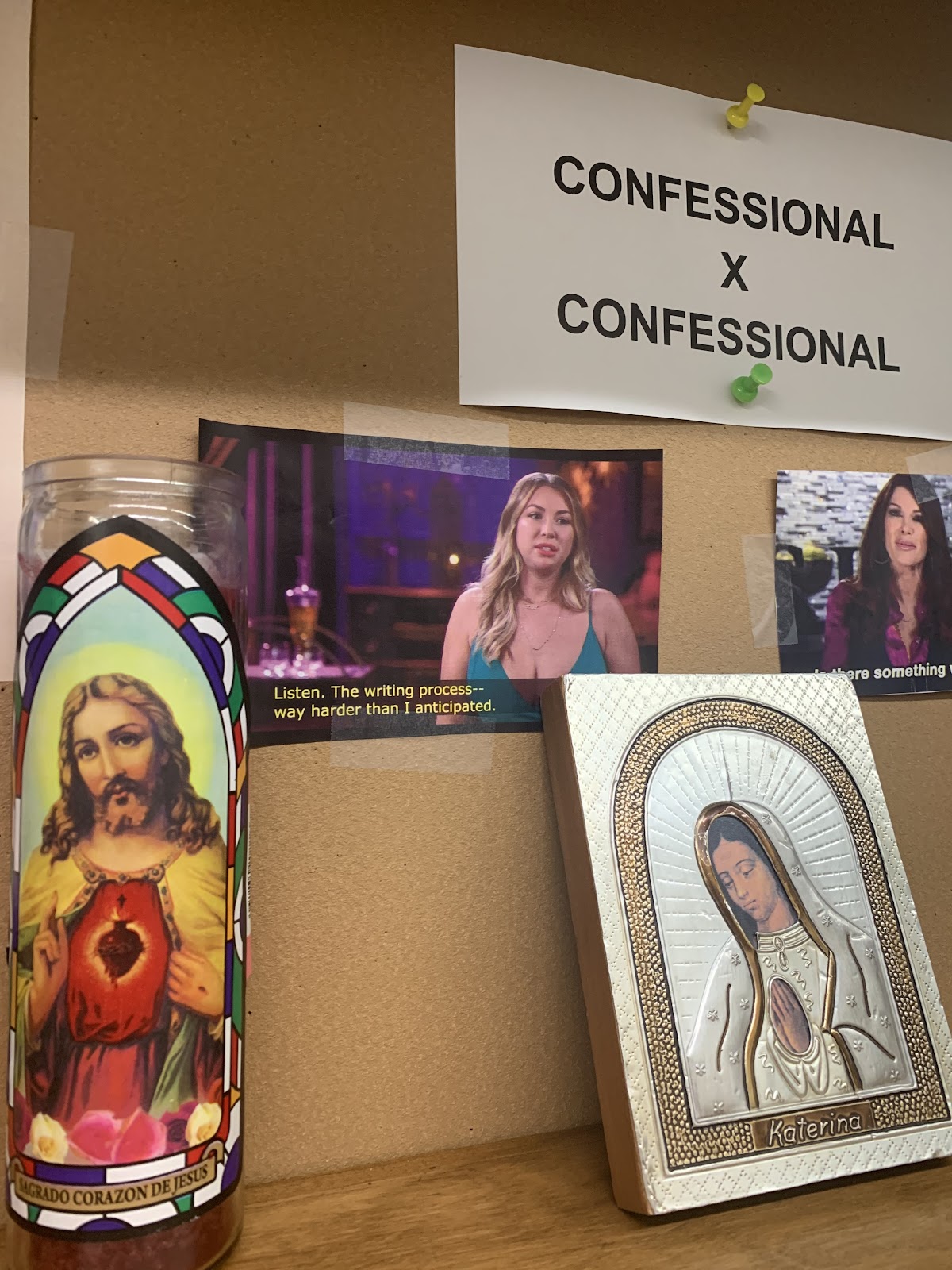 [A blessed metal and hardwood depiction of the Virgin Mary depicted with my name]
*
My first Confession was when I was in second grade. I remember having to sit behind a little not-so-anonymizing screen, with a priest who sported a shock of white hair and skin like parchment paper.  He asked me to recount my sins. We had practiced this, in Religious Ed, but I remember panicking at the big reveal. (A child, what could I have needed forgiven?)
My sins, I squeaked, and then, looking him dead in the eyes, I lied. I made up some age-appropriate atrocities. He gave me a list of Hail Mary’s to do as penance. I pretended to pray in the pew, all the while wondering if his skin would disitigrate, ash, if I were to prod at it.

Your first Confession, my mother said afterwards, wiping at her face. She was beaming.


*
People fucking HATE Reality TV. Men especially. It often makes me feel small and idiotic-- childish even, with some paper-skinned old man lecturing me: this is toxic, garbage, brain-rotting fluff.

Reality TV hits everything too hard. Everything is too much. Connections are too obvious. Insults are too cruel. Everything is turned up-- full volume, speakers crackling. Everything feels high stakes, and yet, so little feels like it matters.

It’s not just me, who loves the excess. I take some comfort in this. Vanderpump Rules has been called the “best show in recent memory.” Roxane Gay has described scenes as the most amazing moments of television. Rihanna watches it religiously. Martin Scorsece has been marked as one of its biggest fans.

This essay is too obvious. Confessional X Confessional. This essay is also not obvious at all, as in, nonsensical, as in pulling too hard, as in-- where am I going with this? Too much and not enough.

If we’re going to hit this metaphor hard: the holy trinity of S.U.R. is Stassi, Katie, and Kristen.
Stassi: 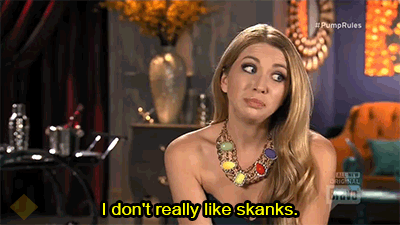 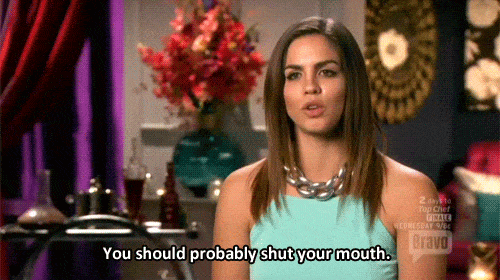 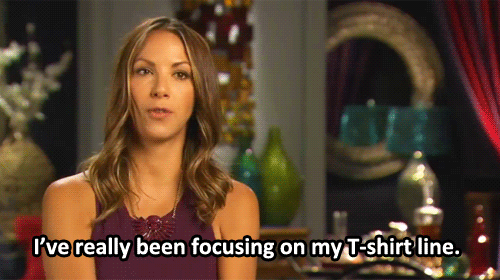 Stassi, Katie, and Kristen are the glue of the show, which is to say, they are three best friends who act erratically, drink constantly, and treat each other with horrifying vitriol and tear-rendering tenderness depending on the episode. They met waiting tables at S.U.R approximately ten years ago, promptly started dating each other’s friends, and the rest is history. Stassi is the ringleader, bottle-blonde with a fierce sense of loyalty— so fierce that anything seen as disloyal is met by violent threats (my personal favorite: I am going to crucify her). Katie’s the lieutenant; she looks at Stassi like she hung the moon.
And then, there’s Kristen. Kristen has a t-shirt line. Kristen stalks her ex-boyfriends like a P.I. Kristen has been fired, banned, and removed from the shows premises on multiple occasions but like an eager bout of mold, keeps coming back.

Kristen also slept with Stassi’s boyfriend, Jax. Twice. On her couch. While watching the movie Crash.

When Stassi—a bloodhound for infidelity— finds out, she smacks Kristen across the face. She uses some choice derogatory words. Kristen is weeping, she finally admits it: I did it, we did it, we broke your trust. Stassi will never speak with her again.

Approximately one year later, Kristen and Stassi hold each other up, both bridesmaids, both joyfully weeping, at Katie’s wedding.

*
There is something really beautiful about watching my mother during Mass. Watching how washes the chalice and pours the wine, screws up her nose at the smell of the skunky church liquor. The way she picks a family from the pews, asks their children if they would like to help her bring up the gifts. How she folds with white clothes, so careful. And yes, how she cries. Big, gulping sobs. How she smiles so big, like a wedge of grapefruit. How she is the loudest AND WITH YOUR SPIRIT. My mother’s relationship with religion is the most stunning excess I know. It leaves me starving. The world doesn't deserve my mother.
* 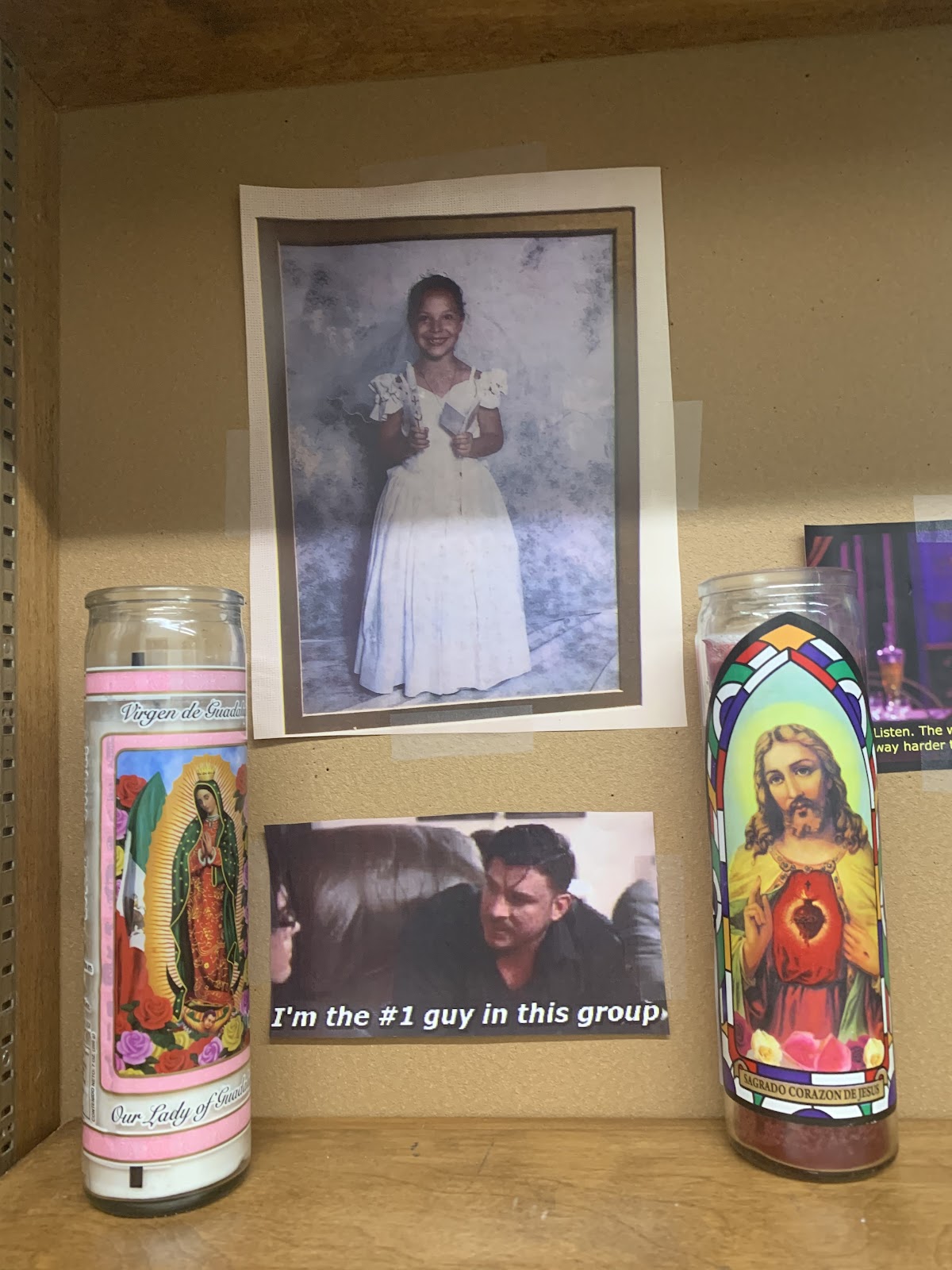 [A photo of a photo of me, on my first Communion. Also, Jax Taylor asserting that he is "the number one guy in this group."]
*
The fourth wall: there is a moment, on reality TV shows, when the participants look straight at the camera. Interspersed between scenes of clubbing and drink throwing and veiled arguing over each other’s drug use, there is direct eye-contact with the viewers, recorded in retrospect by spoken in the present tense so as not to take us out of the scene. These are called confessionals.

An example:
Stassi looks directly at the camera. Her sex-tape has been released without her consent. We’ve just seen a scene of her crying in Kristen’s apartment about it. But now we are in a staged room. She is sitting on a velvet chair. It’s just us and her.

I’ve been going through a lot of shit right now, she says. I trusted someone I shouldn’t have. Her big blue eyes are tinged with red. Viewer, you feel for her.

In those moments, we get emotional retrospect and tears and admittance of lies and love. They are framed as if these reveals are happening in time, are personal conversations between viewer and cast member, all while flitting back and forth between perspectives, from scene to intimacy and back again.

We flash back to Stassi and Kristen in the apartment. This is a year later-- both are dating someone new, Jax long forgotten. They are both crying for Stassi. What has happened to her is horrific.

What has happened to her is horrific.

What has happened to her.

The illusion of the confessional: we can have retrospect during. We can turn to the lazy, unblinking lens of the camera and time can stop. We can look back and forward and directly at the viewer.

I guess what I’m trying to say is-- how did Stassi forgive Kristen? 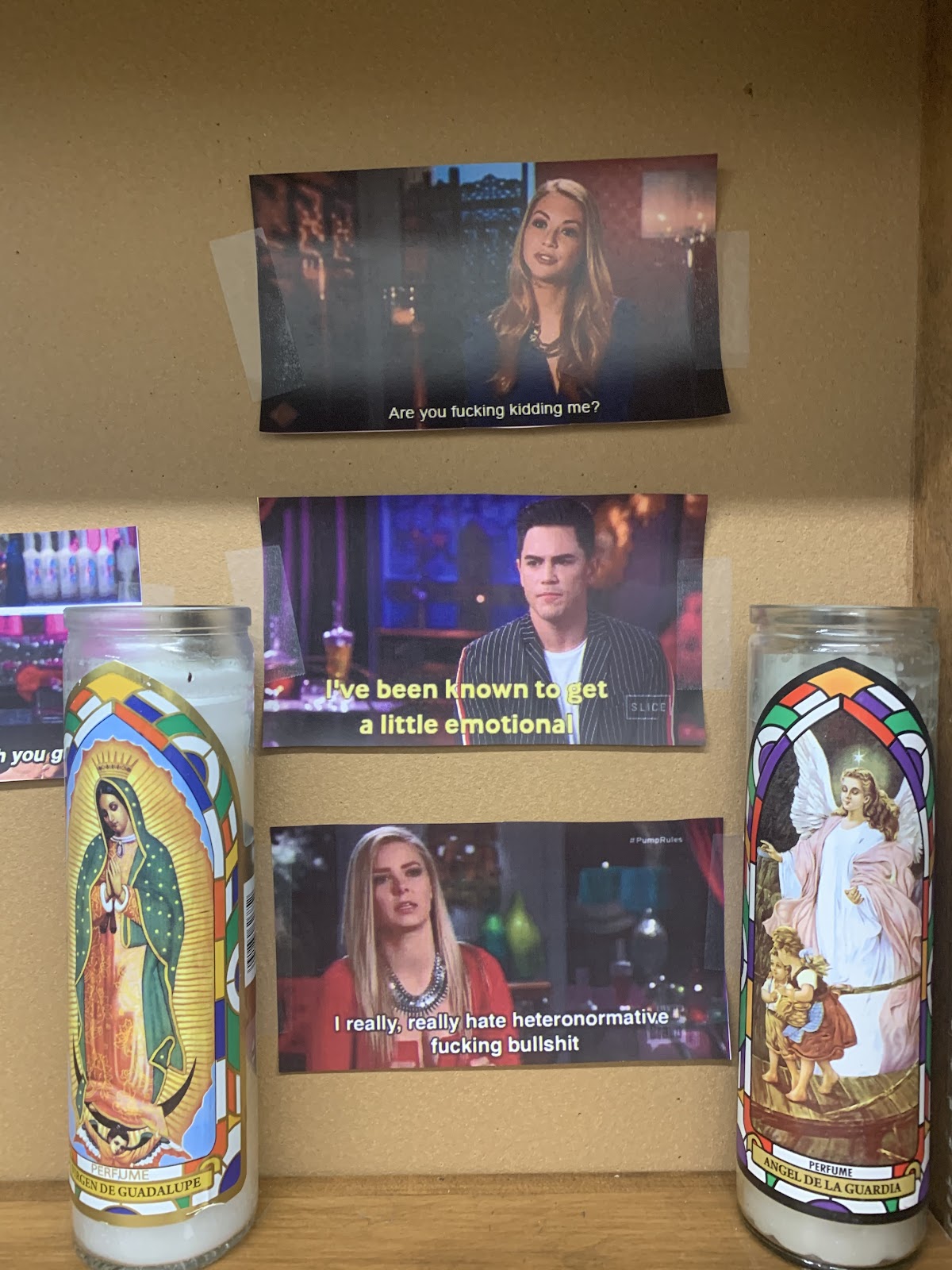 Posted by Katerina Ivanov at 5:23 PM